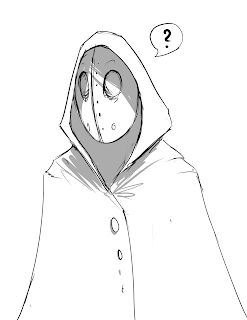 Alright so... I'm really bad at posting stuff... If that wasn't obvious enough already. It doesn't mean I haven't done quite anything, I've been keeping a more healthy balance on hobbies vs art and it's been pretty good in terms of just overall happiness. 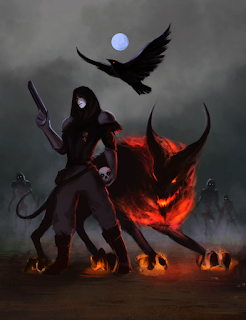 I've been playing some Grim Dawn too, hope that's not too obvious! 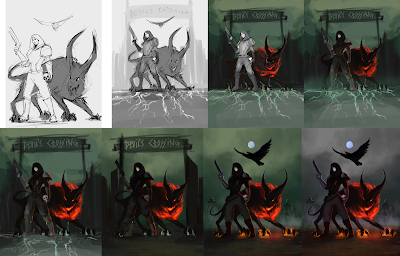 Let me tell you... it was a long process and I'm still not that happy about it. A part of me wants the green-ish background back since it reminds me the Aetherial green color in the game, but the grey grittiness suits the atmosphere as a whole, so... go figure.

I've never been too much of a social media person, in fact I've found it more of a chore than anything to uphold, but I did make a small promise to myself to not let it go. While the art process itself is a lot more important than the last step of posting it somewhere online, I get that there is some value (sometimes a lot of value) to be consistently active in also promoting your stuff.

Additionally to not letting go being active online means friends as well, I've met so many great people last year but I have a bad habit of locking myself into my cave of hobbies and never getting out. A lot of times you need to make the effort, the people are worth keeping around.

Also, being a little less... inquisitive. I'd get riled up on certain issues and people's hypocrisy, which is really everywhere these days, look no further than any local media outlet. I'd get very frustrated for no reason (as in, the anger did nothing but hurt myself). So I've recently begun to let go of things I cannot change and live a more happy life. Obviously, I'm still a rational thinker, but I'm tired of being angry for other people. Time to move on, keep working hard and hope to have something to show for it over time.

This semester is largely crunch time for me in terms of my MA thesis and FINISHING my university education (I still can't believe how fast time flies)!
I'm hoping to make a reasonable divide between my thesis work, art and perhaps some video games too (I can't let go of it entirely, it's my life T_T). It helps I've already written nearly half of it by next week, well almost. I mean considering there's still half a year of time, it's pretty good.

I've started supporting a lot of artists on their gumroads and patreons. If you have someone you appreciate, throw money in their face. Really, additionally for the obvious rewards you essentially give them a virtual pat on the back and say "I value what you're doing". Even just once is enough. The less known the person is the greater the significance, so make someone's day!

Overall I'm damn grateful to be doing what I do and living how I live. I hope everyone has a creative new year!

Today should be a start of master studies week so I'll make sure to get some of those in here as well. Had a MA thesis seminar today, it was nice to see friends after a while but it sure doesn't feel like work is starting. Have to get in the mindset and get some stuff done.
I felt like doing this old thing when I saw someone post something similar 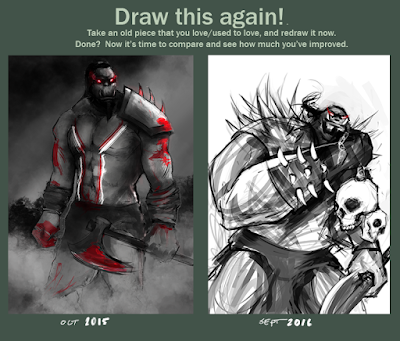 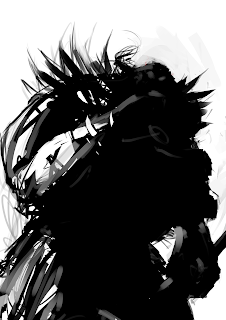 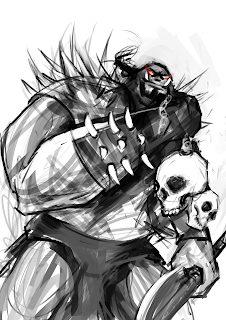 I kind of liked the silhouette of it but I didn't work on it more than my minimum amount, I think it's school work that's messing with me. It needs a lot of work to be satisfying still, like the arm and hand should be a little less stiff and some minor edits that might make all the difference... But mainly the arm is throwing me off a little.
But I didn't use reference and it felt kind of good to tackle such an angle on my own. I'll definitely try to make it more complete even if I don't go for a full on painting with it.
I'm just trying to use more interesting angles and poses. I guess I feel more confident the more I draw, like I could actually slowly start applying the things I've admired about other artists.

Time for another beautiful day

Why am I so tired all the time, always... It's worse right now than ever before. I need to sacrifice my headache-free life for a while and lessen my caffeine intake. I know it's all cool beanz to stay up and drink a lot of coffee because we're all adults and awesome but it's really tiring, and you're much likelier to burn out if you don't take care of yourself. I've been feeling much less motivated lately and I blame that on the caffeine. Well... too much of it, anyway.
And I forgot to post yesterday. I've been on a quest of watching all the X-Men movies and I watched The Last Stand last night and fell asleep right after, damn! Today my lectures started as well. 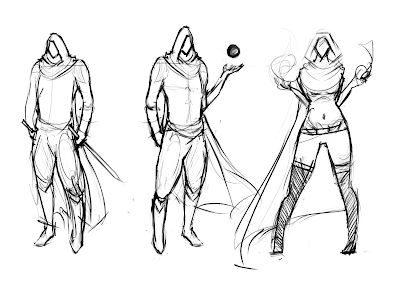 Also I was playing Castlevania: Lords of Shadow (close to finishing it, I'm in the DLC part now), and I had that same canvas open on photoshop and I returned to it like this: 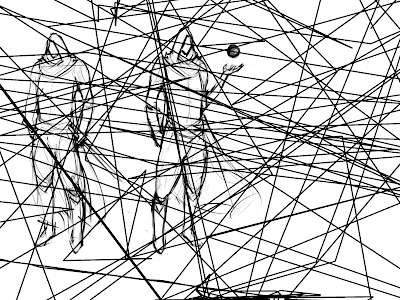 Did the devil take over my PC?
Oddly enough it took just one ctrl shift Z to fix it, guess it was one continuous line, maybe had to do with the controller I was using? It was terrifying, though, I thought I had ruined it at first... 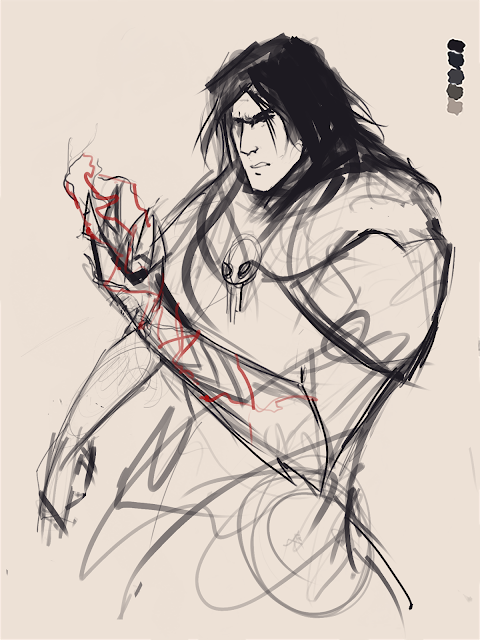 I kind of want to paint Gabriel from Lords of Shadow... Probably one of my favorite parts of the game is the big concept art gallery you can unlock for xp points and I'm constantly putting the points there as I advance, really inspiring stuff there, I wish it would name the artists there too to look up later. Also I'm sitting at 40k points anyway since you're better off spamming basic attacks there than buying fancy combos... shame!

I'll still keep sketching and working on it, but I'll post any advancements tomorrow, I don't want to forget to update again! 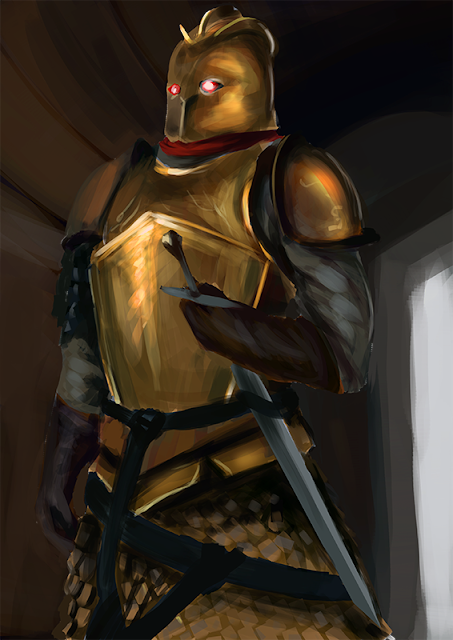 Today was a bad day in terms of practice, I'm having some eye problems and I can't look at the screen for very long before my eyes start tearing up and hurt. I might need a check up, feels bad man...

I only got to work on the Mountain just a little more today. I'm not sure why I gave him glow-y red eyes, I just kind of liked that idea... I'm off to bed to rest my peepers.

I decided to take the "x week" out of the whole equation, I thought it would give me more structure for the month but it's much nicer to do a little bit of everything or what I think I need/want. 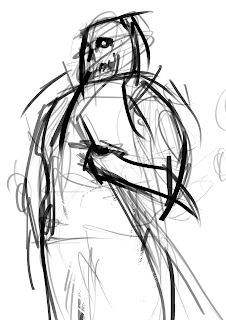 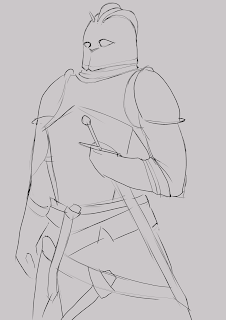 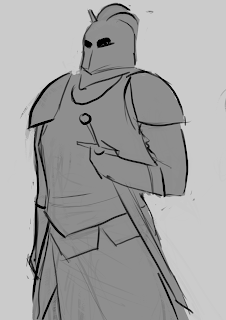 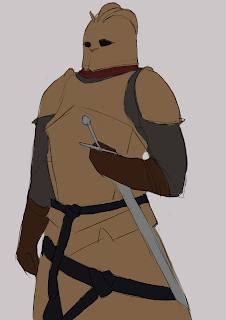 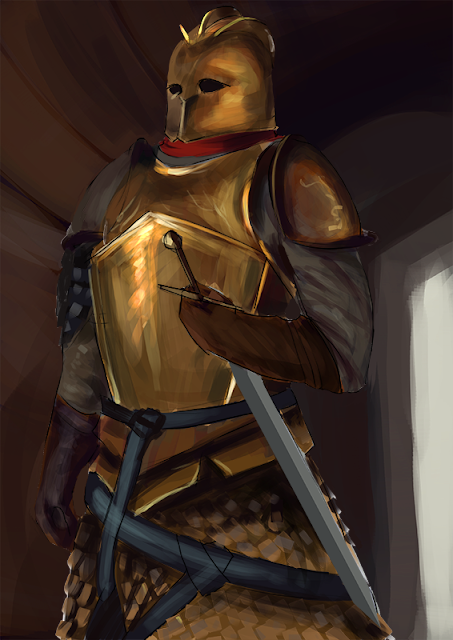 I wasn't able to finish it yet... At first I found it cool to have Clegane's scary decomposing zombie face out but I decided that maybe I'll save that for a future version. I realized also now looking at it that the sword needs a sheath! Silly me.
Posted by janet at September 11, 2016 No comments:

I started the morning off at 7 with some coffee, sketching and re-watching One Punch Man on the side. So I was just taking a big gulp during the intro of the first episode and didn't think there was anything wrong with the subtitles until... 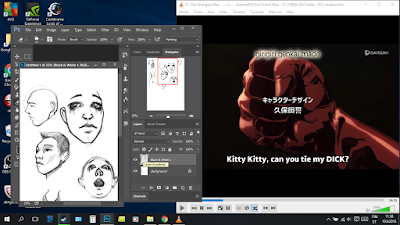 Seems like someone had directly "translated" the Japanese into English and I nearly ruined my clothes and tablet as coffee burst out of my mouth. You done got me with that one, got me good...

Some stuff from today 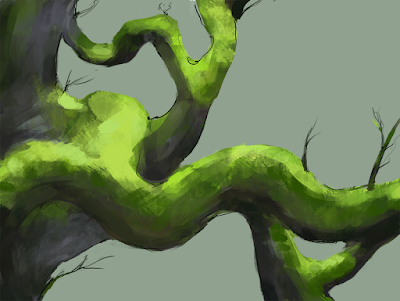 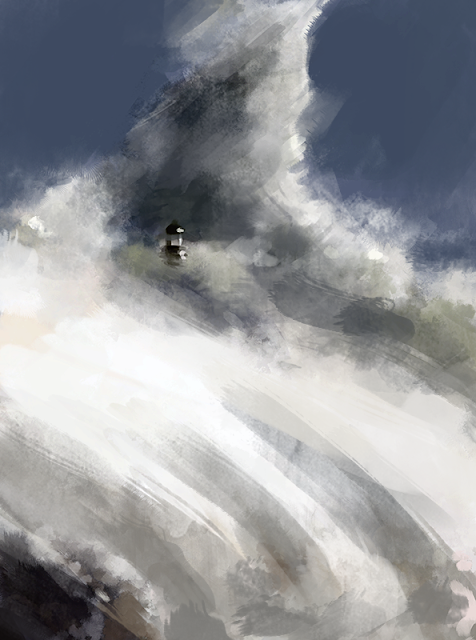 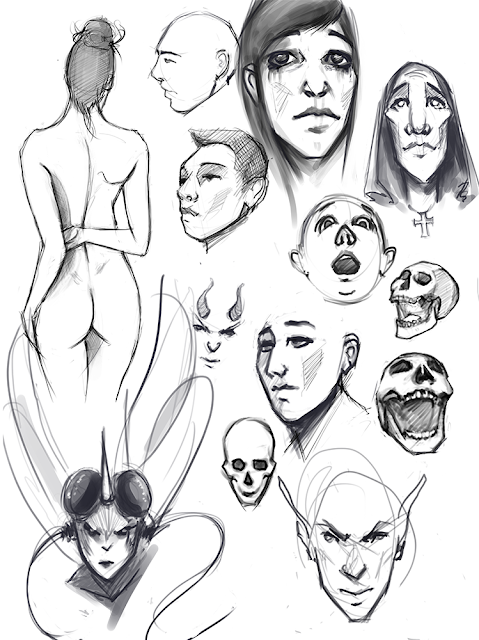 (you may recognize that fly lady from the second episode of OPM :P)

I also need to paint stuff that I want to, too. I put a lot of pressure on myself to do the "theme of the week" but I started this challenge only to keep the pencil moving, no matter what it is necessarily creating. I need to be mindful of that, I don't want to get frustrated and drop it, since I've already been there many times before, I haven't thought of dropping this one though. It's as if... my study streak is inspiring me to keep up, the first week is always the hardest and it seems like I've climbed that hill.

But I'm also happy about this blog as well as Crimson Daggers. Those are the only two places I post persistently now (in CD every other day mostly, though, I like posting many things at once).
It's just me and my journey. Well, in CD it's also the journeys of a lot of wonderful people. Not about likes or the prettiest pictures, but who has made the most progress. I like that, it's a healthy place to grow! I'm trying not to express my gripe with facebook. I realized if Draw or Die would move somewhere else I'd probably leave facebook for good. *sigh*

I'm getting too salty, I'm sorry, I just got rekt on hearthstone ladder by aggro because I wanted to play fun decks. WHY DO I DO THIS TO MYSELF?

It's time for sleep instead. I'll try to paint something fun tomorrow. Yeah, that sounds pretty good. Good night!
Posted by janet at September 11, 2016 No comments:

I'm still sick... ever had those days where you want to google arm anatomy and all of a sudden you're on wikipedia, reading about space shuttle accidents... how the hell did I get there? Now I'm not even sure whether my anatomy is correct, bloody hell 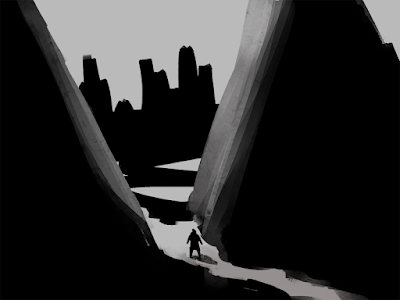 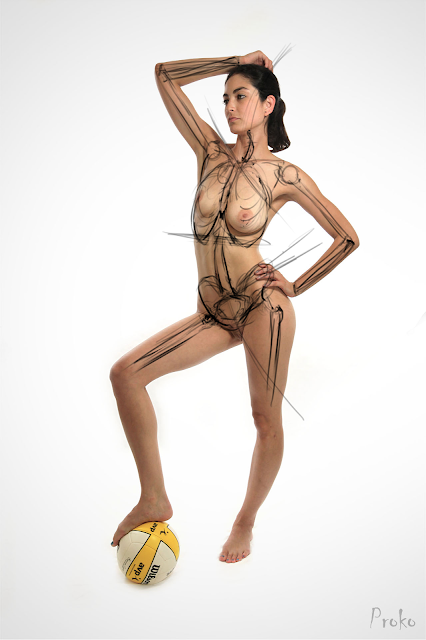 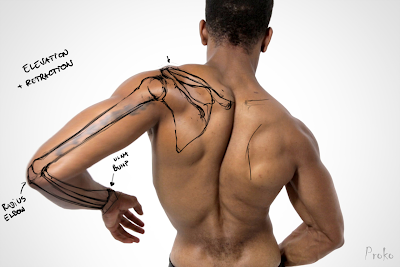 I'll try and correct it all tomorrow with fresh eyes.

I'll feel better tomorrow, I have to ;-;